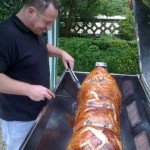 At Big Roast we do at least one Hog Roast event per week in our neighboring borough of Fulham. Our Hog Roast in Fulham has become so popular after doing so many events there that most of our Chefs leave for their events without the need for A to Z’s or Satnavs.

I wonder how many of them know as they gingerly cross over yet another speed bump that Fulham was the first London borough to introduce Speed Bumps in 1984 in Linver Road, a road well known to them all.

There are, I’m sure, plenty of Fulham residents proud of this fact but I am also sure there are plenty who look on their introduction as just another obstacle for the poor motorist to overcome but I can’t imagine that there are any Fulham residents not proud of the little known fact that Gandhi lived in Baron’s Court while studying law.

Big Roast have done many a Hog Roast in Fulham and may never know that Gandhi could have lived in one the properties we have catered in.

Shepherd’s Bush and White City are also parts of the borough well known to our Hog Roast chefs but I am sure, just as with Gandhi, that few if any of them know that the old White City stadium hosted the 1908 Olympics after Mount Vesuvius erupted forcing the games to be moved from Italy.

Big Roast is of course proud to offer a Hog Roast in Fulham and other such interesting and historic part of London.