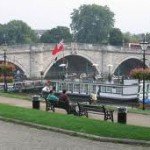 Richmond, a borough in the west of London is probably one of London’s prettiest and is certainly a popular borough for Hog Roasts.

Year upon year Big Roast’s Hog Roast bookings have increased with Hog Roast Wedding events having increased the most. Richmond is an obvious location for a Wedding venue with twenty – one miles of the River Thames running through it giving lots of riverside locations for those important photographs.

Richmond’s main attraction is of course Richmond Park. This beautiful and seemingly wild expanse is home to herds of Deer, lakes and woods and within minutes of entering the visitor feels transported to the countryside and can forget that they are still in the middle of one of the biggest cities in the world.

In 2012 the London Olympics staged some of their cycling events in part through the park and was therefore seen by millions if not billions through-out the world.

Ham House, on the banks of The Thames in the little ‘village’ of Ham a mile along the river from Richmond has also been seen by many millions through-out the world as it is often used in televised period dramas and quite often as the backdrop for Horror movies.

So, if you’re planning a Wedding or just that very special day give Big Roast a ring on 0845 500 5450 to discuss your Hog Roast, Spit Roast or Lamb Roast requirements.