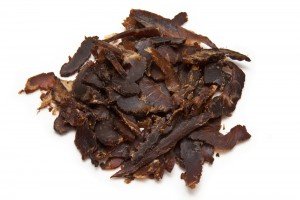 Since time immemorial, man from all over the world has cured meat as a means of preservation. In Southern Africa tribes like the Khoikhoi would dry raw fillets to ensure they lasted longer. The tradition was then adapted by early Dutch settlers who introduced the curing process. The by-product would soon be called biltong, a sensationally delicious treat that is rich in protein and low in fat.

While biltong has its origin in South Africa, there are many other variations such as America’s beef jerky, Switzerland’s Bindenfleisc and China’s Bakkwa. The difference between the variations is mostly found in the thickness, taste and selection of meat. However, preparation is fairly easy, meaning you can make your own instead of spending an arm and a leg for a small portion at a shop.

If you’d like to make your own tasty biltong or jerky snack, following these steps will make you a chef of note.

Your choice of meat will depend on your tastes and availability. You can choose between lean beef, fish or even chicken and turkey. In South Africa and North America, options also include game such as ostrich, eland, bison and elk.

Once you have selected the meat, cut the excess fat off. This is because fat doesn’t dry as fast and can spoil the meat rapidly. However, leave some fat on to enhance the flavour.  Thereafter, cut the meat into tiny strips, 20mm thick and 20cm in length. If the meat has sinew or gristle, remove this section as it can become hard to chew.

This is where your creative powers should take effect. Although you’re free to play around with the ingredients, vinegar and rock or sea salts are prerequisite. You can also add coriander, black pepper, liquid smoke, cumin and chili – this will all depend on what you’d like the meat to taste like.

Add a layer of vinegar and your choice of spices on a flat tray. Place the strips of meat onto the plate, and add another layer of basting and seasoning. Massage the mixture into the meat, and then place it into the fridge for 4 to 24 hours.

To dry the meat, you need to place it in a heating device that can also dehydrate the strips. This is especially useful if you live in a humid, cold region. Most people prefer using the American Harvest dehydrator or biltong maker, but you can also use an oven. Set the temperature to 70°C. Thereafter, place the meat onto a rack, with a tray beneath to catch dripping sauces.

Leave the meat in the oven for 90 minutes and, afterward, check every 30 minutes. The total time for cooking should be up to three hours depending on the cut of the meat. When it’s ready, place in jam jars or a vacuum sealed plastic and leave it to dry for up to two weeks.

Don’t be afraid to experiment, and always be ready to make mistakes your first time round. As you continue making biltong or jerky, you’ll get more experience and create tasty, healthy treats.